Thank you for reading!

Starting at
$3.99 for 1 day
Get Started
View all rates 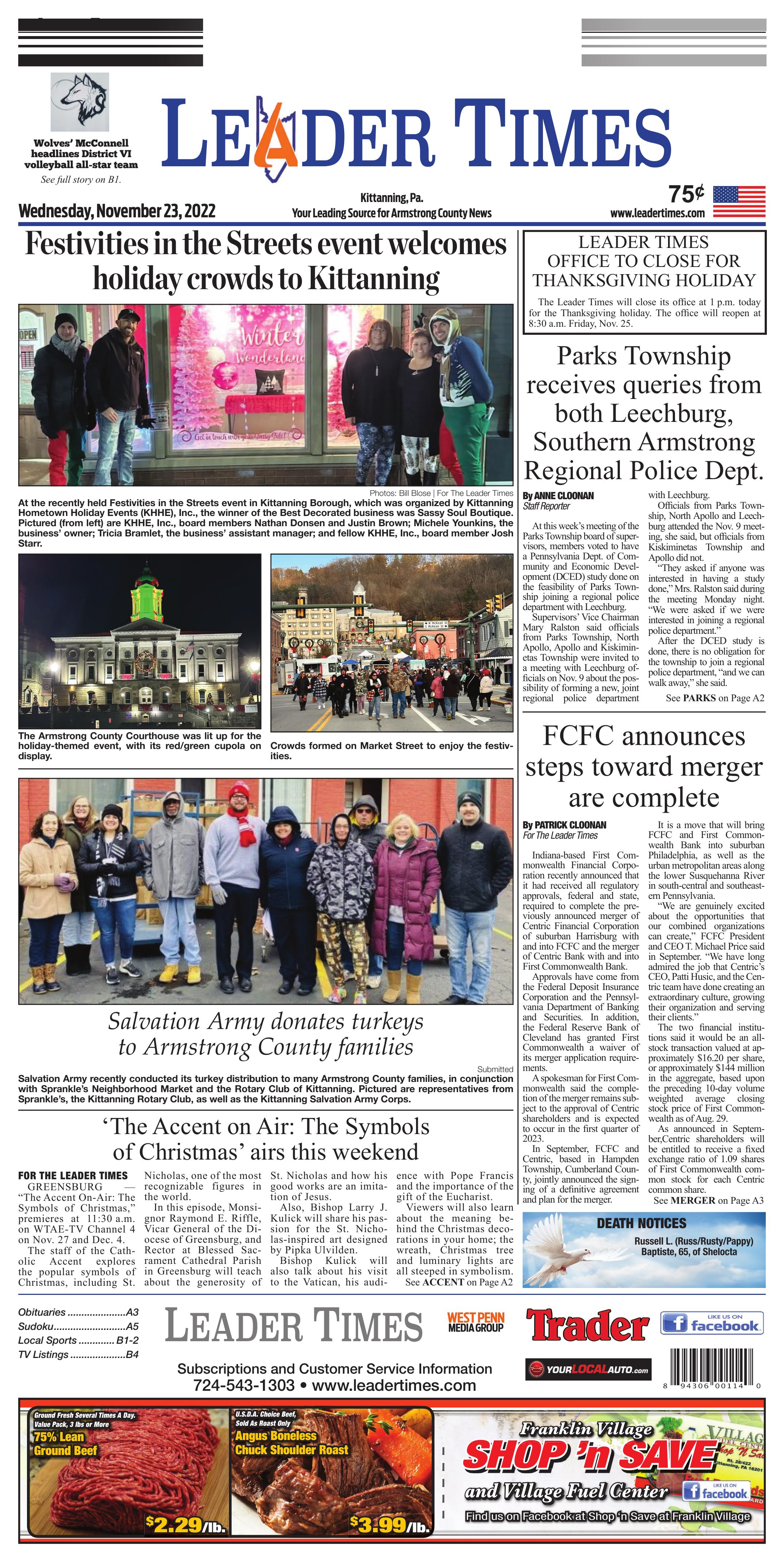 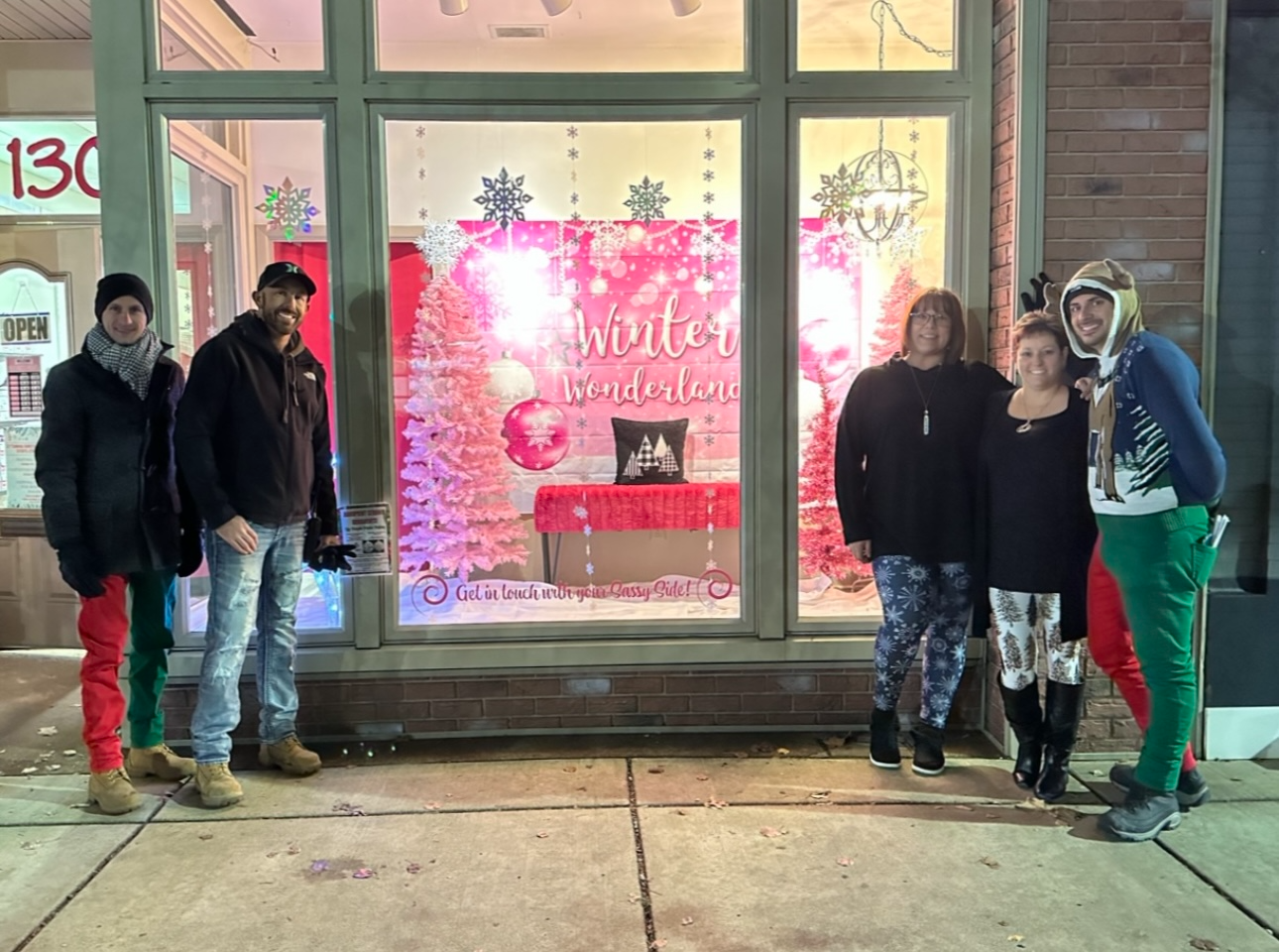 At the recently held Festivities in the Streets event in Kittanning Borough, which was organized by Kittanning Hometown Holiday Events (KHHE), Inc., the winner of the Best Decorated business was Sassy Soul Boutique. Pictured (from left) are KHHE, Inc., board members Nathan Donsen and Justin Brown; Michele Younkins, the business’ owner; Tricia Bramlet, the business’ assistant manager; and fellow KHHE, Inc., board member Josh Starr. 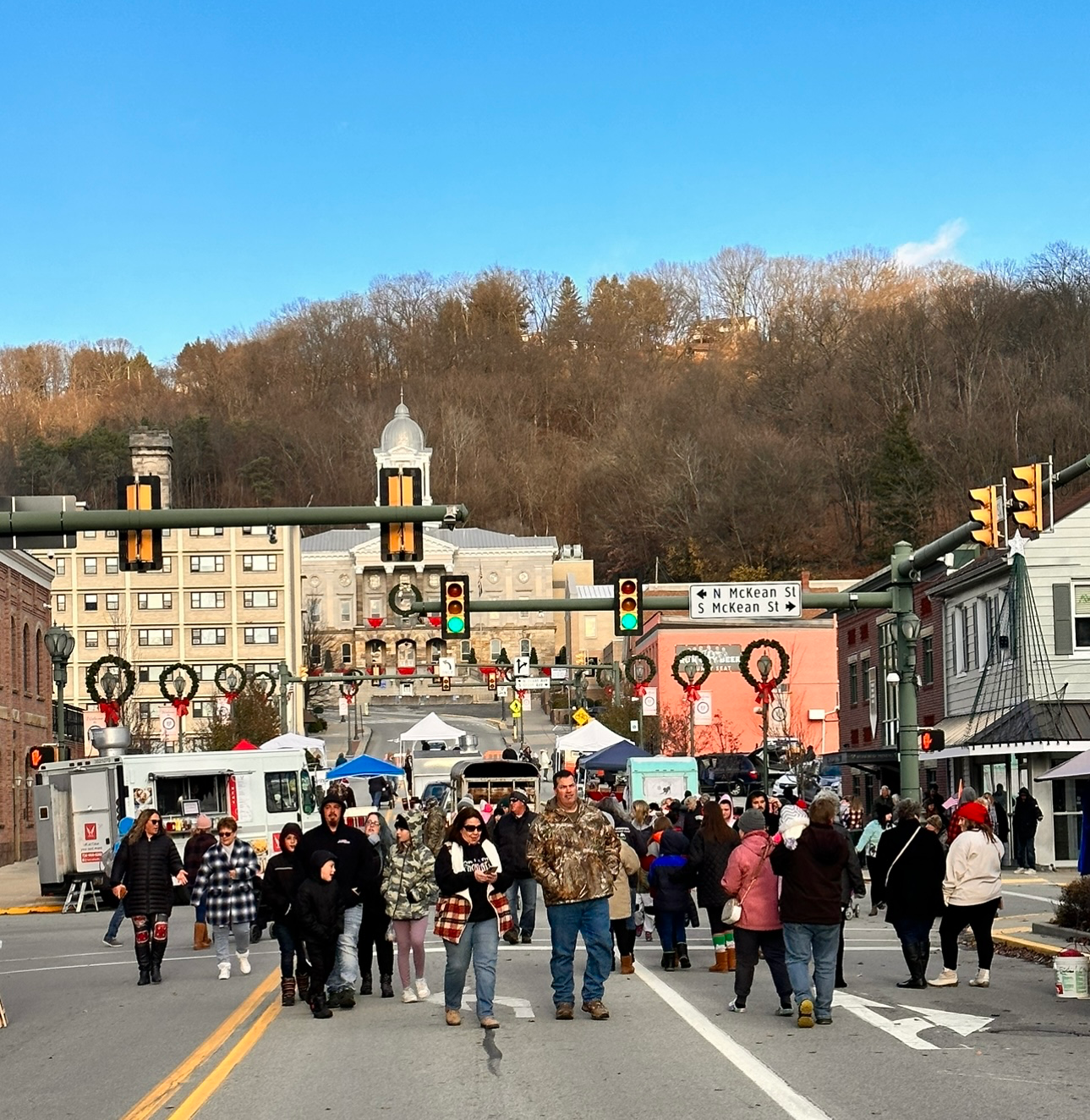 Crowds formed on Market Street to enjoy the festivities. 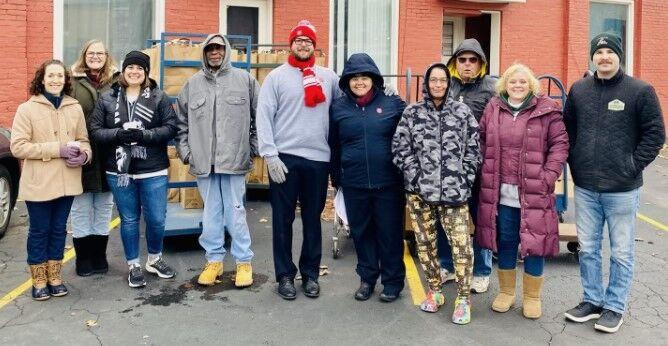 “The Accent On-Air: The Symbols of Christmas,” premieres at 11:30 a.m. on WTAE-TV Channel 4 on Nov. 27 and Dec. 4. The staff of the Catholic Accent explores the popular symbols of Christmas, including St. Nicholas, one of the most recognizable figures in the world.

Viewers will also learn about the meaning behind the Christmas decorations in your home; the wreath, Christmas tree and luminary lights are all steeped in symbolism. 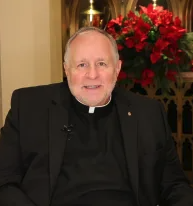 Monsignor Raymond E. Riffle, Vicar General of the Diocese of Greensburg, and Rector at Blessed Sacrament Cathedral Parish in Greensburg will teach about the generosity of St. Nicholas and how his good works are an imitation of Jesus.

The staff of the Catholic Accent explores the popular symbols of Christmas, including St. Nicholas, one of the most recognizable figures in the world.

In this episode, Monsignor Raymond E. Riffle, Vicar General of the Diocese of Greensburg, and Rector at Blessed Sacrament Cathedral Parish in Greensburg will teach about the generosity of St. Nicholas and how his good works are an imitation of Jesus.

Bishop Kulick will also talk about his visit to the Vatican, his audience with Pope Francis and the importance of the gift of the Eucharist.

Viewers will also learn about the meaning behind the Christmas decorations in your home; the wreath, Christmas tree and luminary lights are all steeped in symbolism.

Bells will be ringing this season as churches across the Diocese join to ring church bells as a reminder to celebrate the birth of our Savior.

Bishop Larry J. Kulick is back in the kitchen with a traditional Slovak Christmas Eve soup.

“The Accent On-Air” is always on at: TheAccentOnline.org. 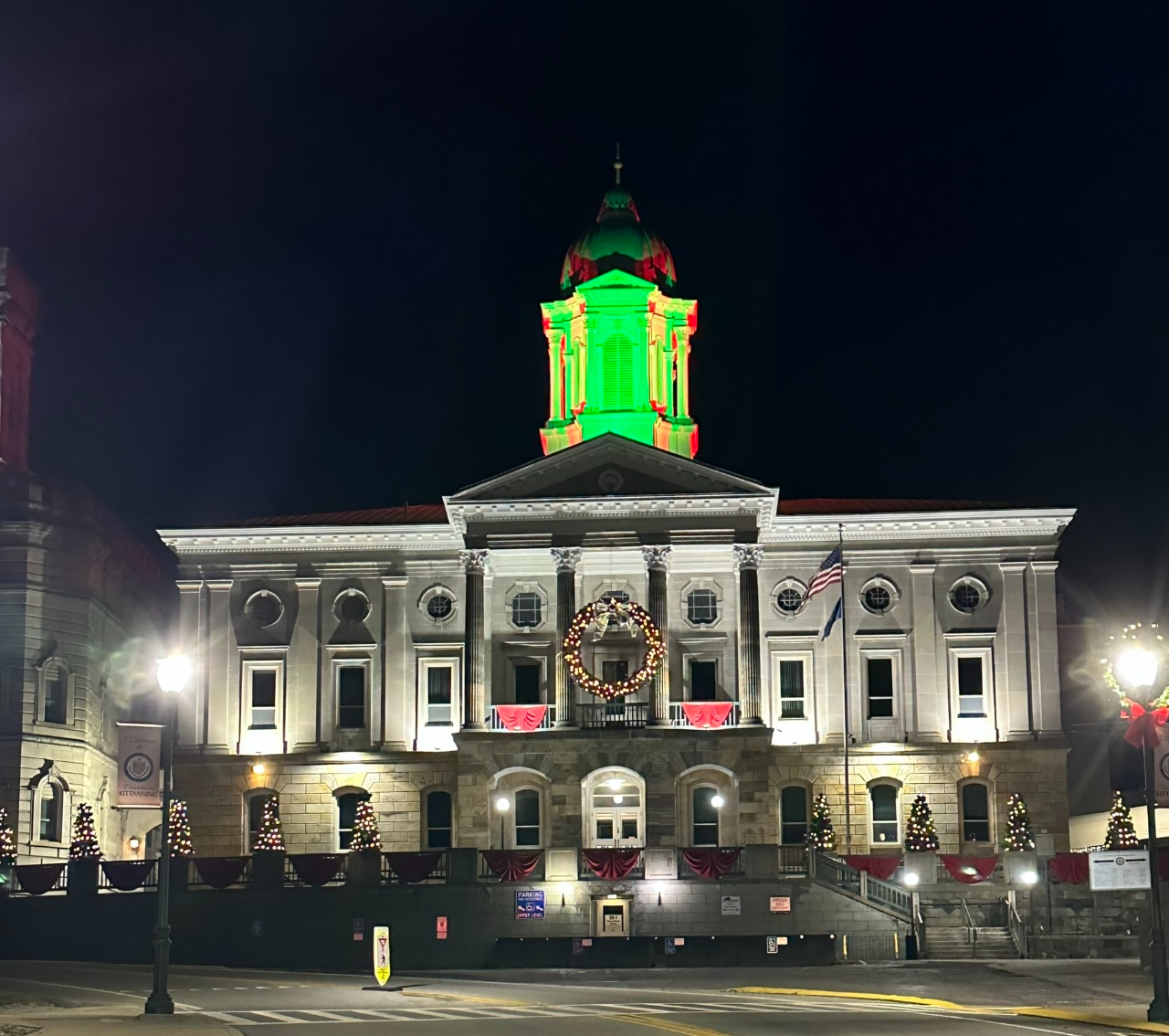 The Armstrong County Courthouse was lit up for the holiday-themed event, with its red/green cupola on display.

The Leader Times will close its office at 1 p.m. today for the Thanksgiving holiday. The office will reopen at 8:30 a.m. Friday, Nov. 25.

At this week’s meeting of the Parks Township board of supervisors, members voted to have a Pennsylvania Dept. of Community and Economic Development (DCED) study done on the feasibility of Parks Township joining a regional police department with Leechburg.

Supervisors’ Vice Chairman Mary Ralston said officials from Parks Township, North Apollo, Apollo and Kiskiminetas Township were invited to a meeting with Leechburg officials on Nov. 9 about the possibility of forming a new, joint regional police department with Leechburg.

Officials from Parks Township, North Apollo and Leechburg attended the Nov. 9 meeting, she said, but officials from Kiskiminetas Township and Apollo did not.

“They asked if anyone was interested in having a study done,” Mrs. Ralston said during the meeting Monday night. “We were asked if we were interested in joining a regional police department.”

After the DCED study is done, there is no obligation for the township to join a regional police department, “and we can walk away,” she said.

Mrs. Ralston said another meeting with Leechburg officials is scheduled at 6 p.m. Dec. 1 at the Leechburg Volunteer Fire Co. Hall, and that Leechburg will be spearheading the DCED study.

He said SARPD currently has six full-time officers, and will have 11 officers if Ford City officials vote to have their police officers join SARPD.

In September, the SARPD Commission, made up of two Gilpin Township officials, two Freeport Borough officials, plus alternates from the two municipalities, held its inaugural meeting.

If Ford City officers join the new, joint department, two Ford City officials would serve on the board that governs what the new police department does, Ford City Council President Carol Fenyes said at a recent meeting.

At the Parks Township Supervisors’ meeting Monday night, initial discussion seemed to indicate that if Parks Township joins SARPD, the township would have one seat on the SARPD Commission.

“Is the discussion open to having equal seats at the table?” Supervisor Scott Kifer asked.

On Tuesday, Gilpin Township Supervisor Charles Stull texted that initial plans are to have two seats on the board for Gilpin Township, Freeport Borough and Ford City, if Ford City joins.

Subsequent municipalities joining SARPD will have one seat on the commission, he added.

Mrs. Ralston said she would like to know how SARPD is paying for all of that, and asked for a copy of SARPD’s charter, and its budget.

Chief Fabec said he will send that information to the Parks Township secretary.

“You have to do your due diligence,” Gilpin Township Supervisor Charles Stull, who attended the Monday meeting, noted.

Ford City council is scheduled to have a meeting at 6:30 p.m. tonight in the borough office to take a tentative vote on whether to join the SARPD.

Having more Democrats than Republicans among his co-sponsors, state Rep. Jim Struzzi, R-Indiana, won unanimous support Monday, 200-0, for his House Bill 1393, which would help prevent deadly overdoses by removing fentanyl test strips from the definition of “drug paraphernalia” which are prohibited and carry serious penalties.

“I’ve worked hard and received a great deal of help in getting a life-saving bill to this point and am truly appreciative of my colleagues vote on House Bill 1393,” Struzzi said. “The January hearing held by the House Judiciary Committee really demonstrated the need for this legislation and was a key to attracting bipartisan support followed by a unanimous vote in committee, which really made me optimistic.”

“Fentanyl is one of the leading causes of overdose deaths, and nearly half of our states have taken this course of action for individuals who are in the grip of addiction,” Struzzi said. “I’m also glad to see the bill was amended to expand the definition of “testing products,” as we anticipate the next wave of dangerous, controlled substances that could unfortunately impact our society.”

Struzzi said H.B. 1393 was developed in cooperation with the Armstrong-Indiana-Clarion Drug and Alcohol Commission.

“We are seeing individuals overdose now on drugs other than heroin and other opiates, as dealers are now adding fentanyl to cocaine, methamphetamines and marijuana,” AICDAC Executive Director Kami Anderson said when Struzzi first introduced H.B. 1393 15 months ago. “These very inexpensive strips are a tool for anyone using any illegal drugs, and the Drug and Alcohol Commission applauds Rep. Struzzi for his efforts to get this bill passed in Pennsylvania and save many lives in our area.”

The bill now moves to the state Senate.

Indiana-based First Commonwealth Financial Corporation recently announced that it had received all regulatory approvals, federal and state, required to complete the previously announced merger of Centric Financial Corporation of suburban Harrisburg with and into FCFC and the merger of Centric Bank with and into First Commonwealth Bank.

Approvals have come from the Federal Deposit Insurance Corporation and the Pennsylvania Department of Banking and Securities. In addition, the Federal Reserve Bank of Cleveland has granted First Commonwealth a waiver of its merger application requirements.

A spokesman for First Commonwealth said the completion of the merger remains subject to the approval of Centric shareholders and is expected to occur in the first quarter of 2023.

In September, FCFC and Centric, based in Hampden Township, Cumberland County, jointly announced the signing of a definitive agreement and plan for the merger.

It is a move that will bring FCFC and First Commonwealth Bank into suburban Philadelphia, as well as the urban metropolitan areas along the lower Susquehanna River in south-central and southeastern Pennsylvania.

“We are genuinely excited about the opportunities that our combined organizations can create,” FCFC President and CEO T. Michael Price said in September. “We have long admired the job that Centric’s CEO, Patti Husic, and the Centric team have done creating an extraordinary culture, growing their organization and serving their clients.”

The two financial institutions said it would be an all-stock transaction valued at approximately $16.20 per share, or approximately $144 million in the aggregate, based upon the preceding 10-day volume weighted average closing stock price of First Commonwealth as of Aug. 29.

As announced in September,Centric shareholders will be entitled to receive a fixed exchange ratio of 1.09 shares of First Commonwealth common stock for each Centric common share.

“We are equally excited for this strategic partnership and the opportunity to gain deeper market share in Central PA and the greater Philadelphia region,” Centric President and CEO Patricia A. “Patti” Husic said. “We have admired the leadership of Mike Price, the culture that has been built by their team, and the reputation of First Commonwealth as a premier financial institution in Pennsylvania.”

“This extension of our physical presence into Harrisburg and metro Philadelphia allows us to deepen our existing relationships in these markets and improve the financial lives of these businesses and their communities,” Price said.

“This strategic partnership will provide our customers and communities with greater access to additional products and services that we believe will result in an enhanced customer experience for our commercial base and the opportunity to augment the retail portion of our business with their product set and consumer verticals,” Husic said.

The transaction represents a continuation of First Commonwealth’s commercially-focused expansion strategy into higher growth metro markets and geographically builds upon its acquisition of 14 former Santander Bank, N.A. branches in Central Pennsylvania in 2019.

Click and hold your mouse button on the page to select the area you wish to save or print. You can click and drag the clipping box to move it or click and drag in the bottom right corner to resize it. When you're happy with your selection, click the checkmark icon next to the clipping area to continue.